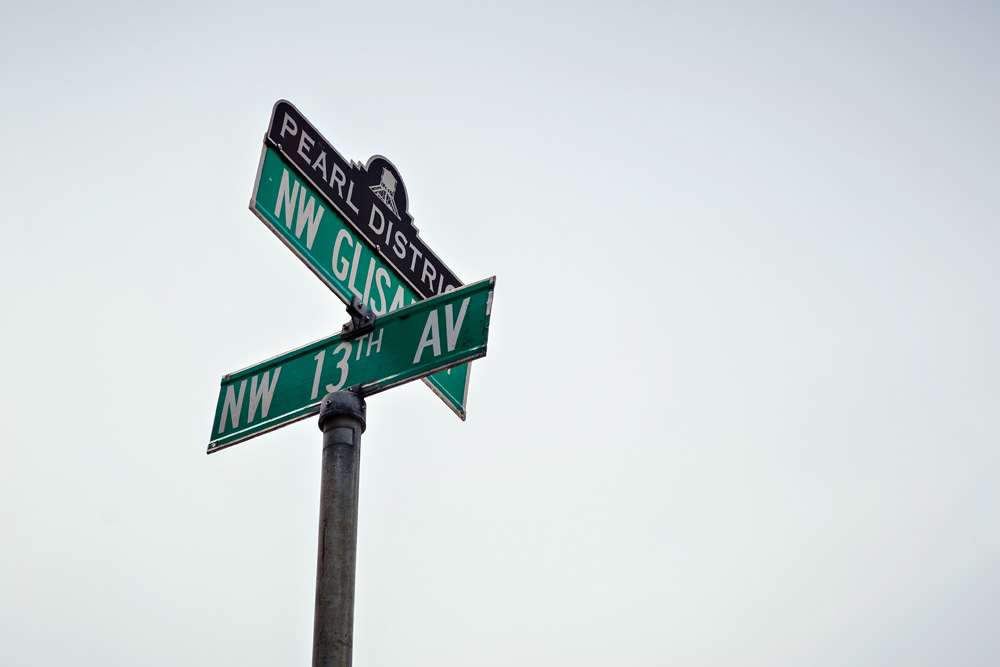 Had you not lived in Portland in the 90s you might never guess that The Pearl District, a vibrant neighborhood full of high-end art galleries, expensive high rises, and upscale dining and shopping was previously the Northwest Industrial Triangle: a low-rent industrial area occupied by railroad yards and warehouses on unfinished lots.

Prior to that, the area’s long and storied history includes the expansion of Henry Weinhard’s brewery business to the point where he wanted to pipe his beer to the Skidmore Fountain in the 1860s, a turf war between two railway magnates in the early 1900s, and the notable story of one of the area’s first resident artists renting a 3,000 square foot space for a mere $100 a month in the 1970s as well as the opening  of the first Powell’s Books location.

There are numerous historical points of interest in the making of the Pearl District, but one fact that is often overlooked and rarely known is that the neighborhood is named after a real woman, Pearl Marie Amhara. Pearl was born in Ethiopia in 1936 and was described as a tall, striking woman who spoke 21 languages and was an avid women’s rights activist and humanitarian. The full story behind how the Northwest Industrial Triangle was coined ‘The Pearl District’ in 1985 is worth a read, and it’s truly fitting that one of Portland’s most unique neighborhoods is named after such an interesting person.

In the early 90s, developers began converting available warehouses in The Pearl District into open living spaces and used the term ‘loft’ to market these urban dwellings to buyers. The loft concept became so sought after that even new buildings in the area were designed in the same way. The Pearl District quickly became one of urban Portland’s most popular, and relatively expensive, neighborhoods. Because most developments in this area come from new construction, apartments and condos are relatively pricey.

This trendy neighborhood runs from West Burnside Street on the south to the Willamette River on the north, NW Broadway on the east and I-405 on the west. The area is stocked mainly with lofts (technically ‘condos’) and apartment buildings, with a few townhomes scattered in. There are no single-family homes in this Portland neighborhood.

The high cost to live in The Pearl (landing at a ‘D-’ for housing and an ‘F’ grade for cost of living) offers a balance with easy access to a plethora of local amenities. It also boasts nearly perfect walk and bike scores, and close proximity to educational institutions.

Schools In The Pearl District Neighborhood

While the Pearl District may be mostly inhabited by singles and professionals, the neighborhood does still cater to families with children, as well as university students, and offers many school options including: Chapman Elementary School (K-5, public), East-West Sylvan Middle School (6-8, public), Lincoln High School (9-12, public), The Emerson School (K-5, non-profit, charter), The Portland Chinese School (preschool-12, non-profit, alternative, private) is located on Portland State University’s campus on the south side of the Pearl.

People who choose to buy homes in the Pearl are choosing a vibrant, urban environment and the lifestyle that embodies. Residents of The Pearl laud the accessible green space, with multiple parks throughout. Many will give up their motorized transportation and supplement walking with the exceptional public transportation options including TriMet bus and MAX train service and the Portland Streetcar. The Pearl offers engaging nightlife, an active arts, culture, and entertainment scene, diverse dining experiences, walkable shopping, and with all of this, even in this downtown environment, the Pearl can offer a close neighborhood feel.

One neighborhood resident, Jana, who moved from Vancouver, Washington to Portland’s The Pearl District a few years ago shares her reasoning behind the big change from suburban life:

“I wanted to be at the center of it all, yet still away from the crowds. I walk everywhere, I love living by the dog park, and I feel safe living in a condo building – the views from my condo are amazing! I’m also grateful for my incredible neighbors – I think we all were meant to live together and secretly I think we all know each other by our dogs’ names instead of our actual names!”

Trulia puts median home prices in The Pearl at $480,000, while Zillow offers a more realistic number of $532,900. Zillow elaborates that Pearl neighborhood homes are, on average, listing nearly $50K higher than they’re selling for in the area, implying that the market leans towards buyers, or is at the very least somewhat neutral.

Those looking to purchase a home in Portland’s Pearl District will find a wide range of entry prices, with a few older, smaller options coming in at around $200,000 for a 1 bedroom, 1 bathroom and 322 square feet – scaling all the way up to top-of-the-skyline luxury at $4.7 million for 3 bedrooms, 4 bathrooms, and about 3,500 square feet.

There’s something for just about everyone in the Pearl. If you’re ready to start the home-buying process (in the Pearl District or any other Portland, Oregon or Vancouver, Washington neighborhood) I’d love to help. Give me a call to discuss your goals! Or, you can start your prequalification process right away by securely submitting your info to me using this online form.

You’re also welcome to stop by my office, which happens to be in the heart of the Pearl. I’m at 1238 NW Glisan, in the Chown Pella Lofts. Give me a ring to let me know you’ll be stopping by. I look forward to working with you!